skip to main | skip to sidebar

Summer of 2012 now ... I was babbling to Faith Ann a couple of days ago about how I had just finished 60 miles on the week, and that I had run 20 of the last 21 days. She responded with "Don't complain to me when you are injured". It reminded me of the last entry in my blog, when she said something very similar. Coincidentally (or perhaps subconsciously) I have a nagging feeling in my left calf tonight, so I'm taking a day off from running. I'm not too concerned about it yet.

How has my running progressed since my last blog entry? Last year was not great in my running world. I believe I had pertussis/whooping cough in the early autumn, interrupting my plans for a good marathon. Even prior to that, my running had really not improved over the summer, for some reason. In fact, I think it regressed.

I then had a good winter of training, until a calf strain sidelined me for a few weeks. That resulted in me not doing a spring marathon. However, I did run a handful of spring races and took in the Cabot Trail Relay again.

This summer, the running has been going quite well, averaging 50+ miles per week, and the little speed I used to have has returned. I ran a new PB on a relatively tough 5k course in in early September, and I'm aiming to get PB times in the half, 10k and marathon over the next month. Hoping for a 3:3X in the PEI marathon in mid-October.

A quick photo recap of the last year follows.

A picture of me running the Hampton 5-miler in early September, 2011. I was slow - not much better than 8 minute miles. Not enough speed work? Carrying too much weight? The 20 miles I ran the day before? 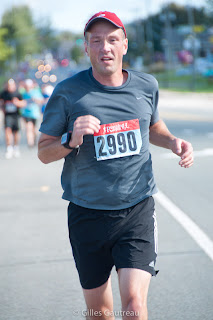 The Fall Classic 10k a couple of weeks later. I started suffering with the cough the day after the 5-miler, and it really hit me during this "race". This picture captures it quite well. 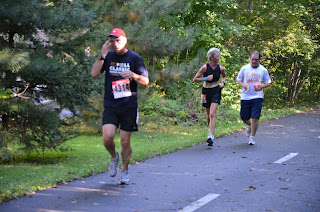 Running the Mount Desert Island Marathon in October of 2011. I still wasn't feeling fell, but finished in 3:53 or so. 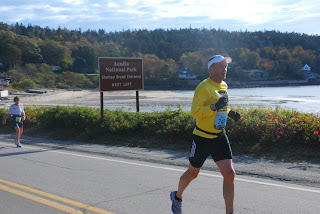 Here was a nice sign Faith Ann and Cam made for me during the race - quite appropriate! 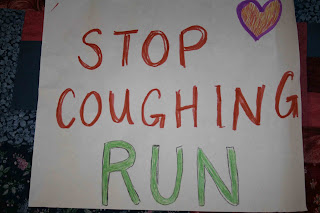 I started a nice buildup through the winter, including a half marathon (not racing) at the "Not-the-Honolulu" marathon in mid-December. It was unseasonably warm - note the lack of snow. 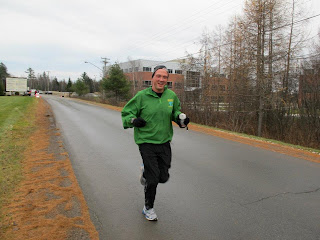 I had a very good build up through January/February of 2012, until a cranky calf muscle bothered me throughout much of March. No spring marathon for me, but I did do several smaller races, plus the Cabot Trail Relay. I always love the Cabot Trail Relay! I ran legs #1 and #13. Here is a picture of me from leg #1. 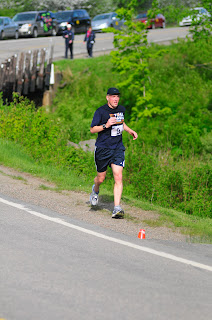 Throughout this summer, I have been running quite consistently, getting in decent mileage with medium long runs/speed work/strides/long runs sprinkled in each week. I ran a half marathon in Saint John in mid-August and was disappointed with a 1:44:58 time, although it was quite humid and a hilly course. In looking at Mike's blog recently for his training for the PEI marathon in 2008, he also had (for him) a somewhat disappointing half in Saint John three weeks before his marathon, but it still worked out well for him at the marathon. Maybe it will for me too? 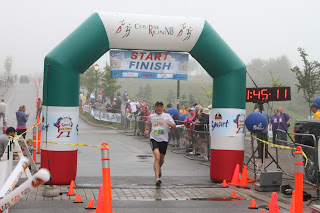 Fast forward to my 5k a couple of weeks ago, where I was pleased with a 22:51 time. I may run a 5k the week after my marathon on a flatter course - perhaps a chance to break 22 minutes? 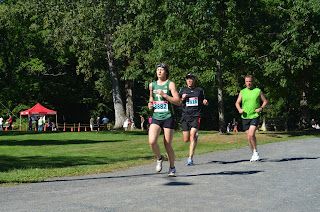 All for now ... more to come as the marathon approaches, and I'll report on it here as well.
Posted by Trevor at 9:24 PM